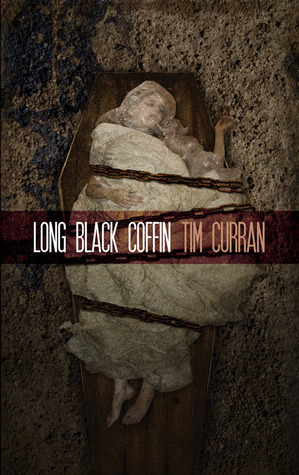 Damn, damn, damn. Now THAT was how you do horror. Tim Curran’s Long Black Coffin actually gave me shivers – yes, shivers – and that’s something that hasn’t happened in a very long time.

Long Black Coffin is a working class ghost story set in a small town in Wisconsin. Johnny Breede is your typical mid-twenties guy trying to figure out what he wants out of life while he puts in his time down at the lumber yard. He lives with his sister in their parents old house. His mom ran off, long ago, with some swinging dick and his dad sat and drank his life away. Johnny is no dummy. He’s intelligent and has street smarts. Him and his buddy, Kurt, like to drink too much, get high too much and ponder life too much. Kurt has his own demons. His abusive old man wrapped his lips around a loaded shot gun, one night, in the front seat of his black 1967 Pontiac GTO and pulled the trigger. When Kurt gets drunk, he tortures himself with wondering why Vic killed himself and, lately, he’s been doing it more and more often. In fact, it feels like something in the GTO is calling him.

What makes Long Black Coffin great is the storytelling. Curran does a masterful job telling the story from Johnny’s POV. Its a blue-collar, non-nonsense approach that elevates the story to being a 5-star masterpiece. It makes the characters extremely realistic and full of depth. The fact that he can throw in a handful of chills along the way, makes it a fun ride.

5 tires burning rubber out of 5