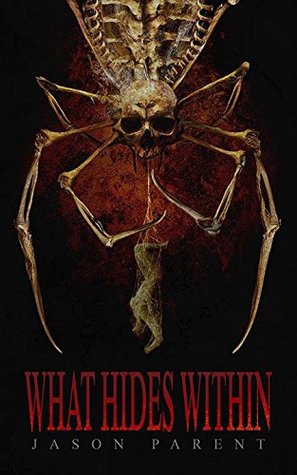 What started out as an innocent trip on the river, paddling around with your girlfriend, ended up headfirst into a huge spider’s web. The next thing Clive knows, he’s hearing a voice from within, and it’s telling him to do things. Clive, the poor bastard, doesn’t know if he’s losing his mind or if he really has a talking spider communicating with him deep inside his head.

Jason Parent’s latest tale is one of the most unique offerings I’ve ever read. He’s created such great characters in this one. You can’t help to sympathize with Clive and his plight. Is he going insane or is there really a talking arachnid behind it all? However, my favorite part of the story is in the voice in which it’s told. Parent uses a fresh, snarky humor that almost pushes the story into satire. Almost. It does, however, provide the story with a breath of fresh air and a few chuckles that you can’t help along the way. I can’t help but draw comparisons with the ball-busting dialogue that my friends and I unleash on each other. What Hides Within is a well-crafted tale of psychological terror with shades of a Lovecraftian hard-boiled crime story. Great stuff.